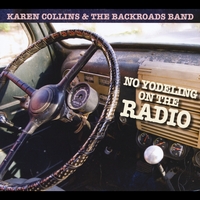 Karen Collins & the Backroads Band-No Yodeling on the Radio

When this cd started playing and the vocalist started singing it was a sound that brought back memories of artist from many years ago. With a voice that would have fit perfectly in the 50’s and 60’s era of country music. Karen Collins has a lot in common with artist like Loretta Lynn and specially Rose Maddox. With the sort of comic yodeling that is engaging and reminds one of artist from the days gone by. You can tell this lady loved Hank Williams, Jimmie Rodgers and probably both the Loretta and Rose. Here voice is a quirky mix of country charm and offbeat humor. A bit of Minnie Pearl echoes in the air when Karen sings. The song No Yodeling on the Radio is a pure delight. With a modern twist on the lyrics, with the vocals winding down the road of country music history, Karen Collins is an enigma in the music scene.
If you grew up on Hank Williams, Loretta Lynn, Merle Haggard, Tammy Wynette, Rose Maddox and other such greats from country music then Karen Collins and the Backroads Band a wonderful modern take on an old style. There is some fine picking on this cd by band members Ira Gitlin and Geff King. The bands plays rock solid grooves though out the cd rocking when they need to and playing it nice and easy when it’s called for.
That There Boogie is a jaunt into the rockabilly boogie sound with excellent effect. Too Much Me, Not Enough You could easily have been recorded by Loretta and is an example of how Karen uses the throwback sound to excellent effect. Mama’s In A Honky Tonk Downtown is another track that could easily be a classic country track. Though I think it would have worked better with Karen doing the vocals.
Parallel Lines is an acoustic Americana style song that has nice duet by Karen and Geff King.
Salvation Saloon follows in the foot steps of classic country music and if you are a fan of the artist mentioned then you should enjoy this cd for years to come.
Click the pic to purchase.